A sequel to SRW DB in the SRC Engine

In the year 21XX, mankind reaches a newfound period of prosperity. A new era follows the Orbal Revolution, offering a clean source of renewable energy. Old energy sources were replaced, putting an end to the depletion of oil and ending reliance on such limited resources. Technology leaps forward at a rapid rate, built off the backs of Reploids – the next evolutionary steps of robots with the ability to think, feel and emote, just like an actual human.

But within this bright peace lies the seed of darkness. The BF Group and Black Lodge, a criminal group bent on World Domination and dark sorcerers with inscrutable motives rose from the shadows, threatening to plunge it into chaos. Rumours claim their leadership is comprised of superpowered humans, able to take on odds of a 1000 to 1 and born from a mysterious event 10 years ago, but no records could be found on the subject. To make matters worse, Reploids began to go berserk, attacking humans and infrastructure. These Reploids, once close allies of humanity, has now become a danger to those it had once sought to help and thus were dubbed “Mavericks” by the general public.

To combat the threat, the International Police Organization was formed, made up by brave men and reploids from all over the world. Many methods to overcome the overwhelming odds were researched – the reinstatement of autonomous Golems and other giant piloted machines held the line but could not be effectively mass-produced to turn the tides. Tactical Orbments were developed – amazing gear that allow even mundane humans to cast magic as if he had magical potential once restricted to those that were once in a million, and the world could finally fight back against the vile sorcerers of Black Lodge.

However, despite all this, things remained at a stalemate…

…until a mysterious item falls into the hands of the IPO – The Black Orbment.

A conspiracy that threatens to engulf the world is gaining momentum.

The clash between Man, God, Machine has begun…

Trails in the Sky

Cal of Silver and the Queen of the Deep Blue Sky

*Dual Route System – Two interlocked stories, freely carry upgrades and items
from one route to the other.

*Tactical Points – Spend your TP on helpful battle effects and
turn the tides of the battle against your enemies.

*Workshop – Craft a variety of equipment and weapons to customize your units. 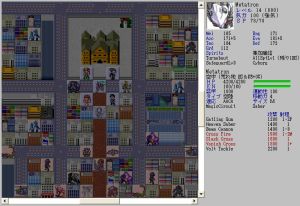